Welcome back to a new season of Once Upon A Time!

Let’s slide right back into things:

Plot: Episode 1 continues the story of Maid Marian and Regina in love with the same man, Robin Hood. Marian, Hood’s wife, was brought back from the past by Emma who saved her from Regina’s dungeon. (Spoilers) Hood picked Marian to continue his story with; after all, they pledged until death do them part. You know what? Good for them! Live up to your promises! 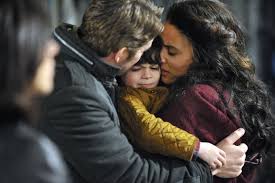 Of course this throws Regina into a rage and it appears she’s back to her wicked ways. She disappears into a secret hallway which leads to a dungeon (all in Storybrooke). Within it she has held captive her mirror, Sydney. She plans to use him to help her go back in time to kill Marian before she is saved. She demands to see Marian from the past, who she can not remember 🙁

Luckily, the mirror shows her exactly what she wants to see: Marian calling her a monster for being cruel. Marian had guts in the past. She told the Queen that if she had love or a family she wouldn’t be bringing destruction and hatred to the world like she had back then. 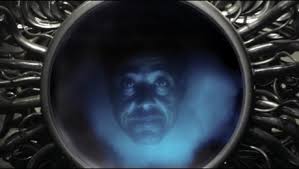 Meanwhile,  there’s Emma and Hook whose relationship is complicated. Yet again, Emma is avoiding Hook because of her guilt. They are warned by a Dwarf about something that can freeze having frozen over their truck. (Apparently they didn’t see Elsa when they nearly ran her over.) Emma and Hook follow the frozen trail but encounter the ginormous, roaring snowman that Elsa used as a castle guard in the movie. While the snowman keeps everyone busy, Elsa finds a newspaper with Gold and Belle’s announcements. She sees the necklace she bought for Anna on it and disappears to find his shop.

Of course by now the Queen is plotting her evil schemes. Unluckily, the snowman has also cornered our heroes. Emma’s power is their only defense left. Sadly it isn’t enough- they’re knocked out by “Spikey” the snowman. Marian tries to use her bow and arrow to protect everyone. When she’s knocked down as well, Regina appears. The snowman stops, puzzled and Marian pleads for help. Regina disappears only to reappear behind the beast as she defeats it with fire power.

Now that Hood is finally awake, he rushes to Marian to find out what happened. Regina welcomes her to Storybrooke and then takes her leave as Emma tries to approach her.

Conclusions: 1) Emma tells Hook she is avoiding him because she feels guilty, 2) Elsa finds the necklace she gave to Anna and vows to find her sister, 3) Regina devises a plan to force the writers of her book to give her a happy ending…Oh, and Gold finds a weird doohickey that happens to have a universe inside it.

(all pictures used for promotional purposes only)