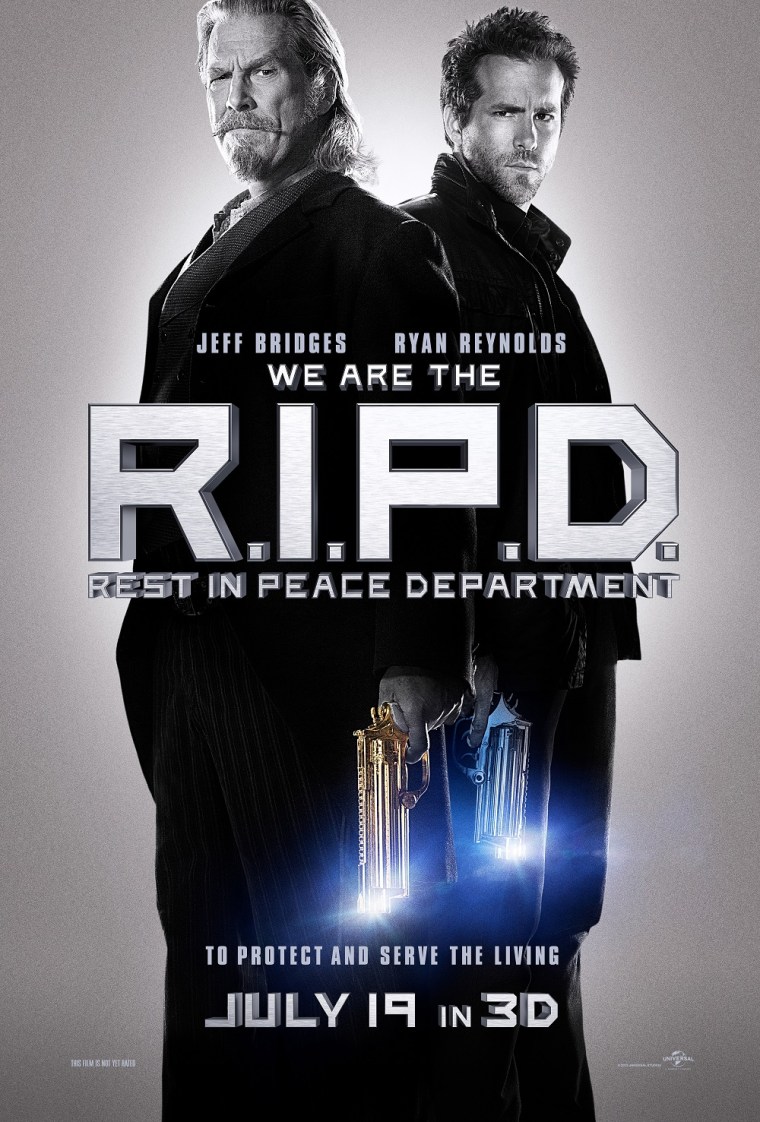 Boston Police Department detectives Nick Walker (played by Ryan Reynolds) and Bobby Hayes (played by Kevin Bacon) stole a chest full of gold found during a drug bust. Nick buries his gold in his backyard, wanting to save it for him and his wife, Julia (played by Stephanie Szostak). Nick later regrets even taking the gold and tells Bobby he’s going to return it. Later, during a warehouse raid, Nick and Bobby get into a shootout with criminals. Nick gets killed by Bobby during the shootout, Bobby framing one of the criminals for the murder. Nick ascends in a tunnel in the sky to the afterlife, and is pulled into the office of Mildred Proctor (played by Mary-Louise Parker), the director of the Boston R.I.P.D. (Rest In Peace Department), an agency where dead police officers are recruited to capture Deados (spirits that failed to cross over and return to Earth as monstrous ghosts). Nick agrees to join the R.I.P.D. because if he does it will put off a possibly negative final judgment for at least a century. Nick meets his new partner, Roy Pulsipher (played by Jeff Bridges), an ex-US Marshal who lived in the 1800’s. Once Nick fails to talk to his wife at his own funeral, he learns that R.I.P.D. officers are given avatars and that his is an old Chinese man named Jerry Chen (played by J. Hong) and he finds out Roy’s is an attractive Russian woman named Opal Pavlenko (played by Marisa Miller), Nick and Roy go off to kill Deados that eventually leads into a case that could destroy life and death as we know it.

This is difficult. The characters aren’t really written strongly, and a lot of the actors just deliver the funny lines and Jeff Bridges just hoots and hollers (sometimes incoherently) over everyone. Unlike other films with characters who bark goofy lines incessantly, no one here really has any charm when they’re barking their goofy lines. Except for maybe Mary-Louise Parker, unless you don’t get tired of Jeff Bridges barking like Yosemite Sam. What doesn’t help is that Jeff Bridges and Ryan Reynolds have almost no chemistry when acting together. Save for when Ryan Reynolds has his mouth shut and just has an annoyed look on his face when Jeff Bridges pushes him around. When Jeff Bridges isn’t barking, Ryan Reynolds is just taking up space. Maybe that’s more the writing than his actual fault, but even when he had moments that are supposed to be tearjerkers or something that at least makes you feel some kind of sadness, it was not convincing in the slightest. Perhaps the director just told him to pout most of  the time, or to sigh like a petulant teenager. Perhaps.

Stephanie Szostak and Ryan Reynolds are tied for the dullest performance in the film. Again, this may be a fault with the writing rather than with them personally. Kevin Bacon plays just a guy who wants to do evil things, because why do you even care? Why are you not laughing when Jeff Bridges talks about his ankle fetish, and that time he had to watch his corpse get skull-fucked? The actors have no chemistry, even Ryan Reynolds’ character and his wife have nothing. Just announcing that the characters are married is not enough to convince the audience, especially this audience member, that they love each other. The actors have to sell it; the actors did not. Overall, when looking at the main characters have their quirky little final moments before the credits roll, you may start to wonder if this film could be so much better – with a different cast. That is obviously a very bad sign. The acting will get a generous 4 out of 10, mostly because the actors actually put in some effort into their comedy bits, and the villains (bar Kevin Bacon) committed to their villainy, but otherwise everyone is still just doing a cold read.

The Deados are fun to look at. Well, not in the same way that some people like looking at sports cars. The Deados look very good, the “mutations” are disturbing and yet fit in with the world around them, they look good enough to not be too jarring. The turn to smoke effect that happens when Deados or R.I.P.D. officers are killed also looks good. When Ryan Reynolds’ character goes up to Heaven, that’s very pretty to look at. So visually speaking, that looks great. Although in 3D they show you more gross things than pretty things. It’s filmed very well in terms of camera work, sound effects, and stunts. It looks like a professional film, but nothing really stands out a lot save for maybe one overly obese Deado, and how whenever you see Jeff Bridges’ avatar they almost always slow the camera down and make it look like she’s walking down a runway or have her do something that people may find sexy. It’s a joke, sure, but it gets stale after a while. That said, Deados would be great to see in a video game. 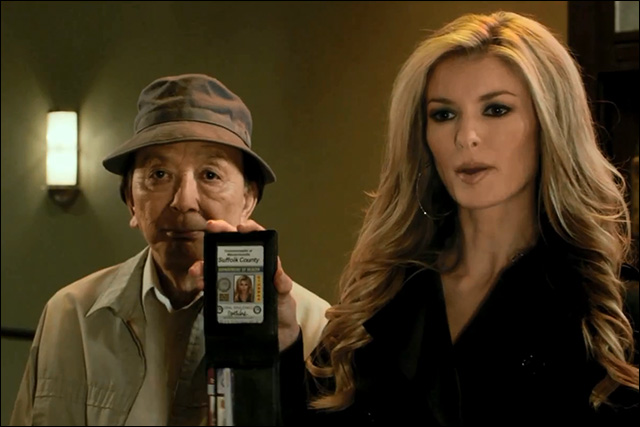 The characters are just barking funny lines to each other, save for when they try to have sad scenes. When the film has sad scenes, the writing up to then makes you as an audience member not really feel the emotions they want you to. This script is like a bully, it is trying to force you to do what it wants constantly but if you try to ask why it won’t give you an actual answer. Big examples of this are when our two leads are supposed to be friends, you don’t really get why – other than it is the end of the film, so they have to be friends, right? Another is how a big part of Ryan Reynolds’ character arc is that he wants to be with his wife, instead of being a member of the R.I.P.D., so the film tries to milk scenes where he’s trying to be with his wife, but it’s played for the “fantastic comedy” of an old Chinese guy stalking a woman. The main challenge, that big trial our hero is supposed to overcome, is that his wife cannot see anything, but that old Chinese guy. Eventually the film tries to do a “love conquers all” thing, but that totally fails because the writers and the actors don’t even convince you that these two characters actually love each other, or are that deeply in love. Sure, Ryan Reynolds’ character wants to be with his wife constantly, but nothing when they were together before he died convinced the audience that they are in love, or for that matter, married. But the film wants you to feel good about love and you have probably forgotten the rule that God has that makes it so no one in the living world can see an R.I.P.D. officer’s actual self. That discrepancy isn’t explained or mentioned in any way – not even a shrug.

The foreshadowing in this film is funnier than most of the actual written jokes. It’s just so bad that you can’t help but laugh at it. Examples include: “Gee, Kevin Bacon really wanted that gold. I wonder if that will be important later?” or “Jeff Bridges’ character really has a thing for ankles. But his apparently only female coworker/superior who constantly nags everyone, especially him, wears knee high boots. Gee, I wonder why. Hmm…”. Anyway, when the film does go for a joke, it tends to aim rather low. Sure, you can milk Jeff Bridges’ attractive avatar hanging around an old Chinese guy dressed like he’s about to go fishing, but around the sixth time that can get rather stale, which is mostly because all they do with that is just show how pretty the avatar is and how a bunch of idiots can’t keep their jaws attached. With how much of a slob they kind of make Jeff Bridges’ character out to be, why not show the “hot chick” do those nasty things instead of just showing him. That may be low-brow, but it fits this film’s comedic conceit almost too perfectly. The explanation for the way the avatars get from the office to the real world is funny, but a lot of the other jokes are hit-or-miss. Unless you really like hearing that a coyote skull-fucked someone’s corpse and the person who was once that corpse had to watch as a ghost. That’s the level of comedic material you are generally dealing with if it’s actual “witty banter,” as opposed to a visual gag such as the attractive avatar making almost all of the men in the film turn stupid. Not to mention that of the two important female characters, one’s a pretty wife and another – a whiny boss lady who has a crush on the employee who does not listen to her.

The film has a rather amusing concept, too bad it was executed so horribly, which gives the story a 4 out of 10 for the chuckles I did get, and the mildly interesting concept. Otherwise, the film is just painful.

When coming out of the film, you may think to yourself that this film’s idea would be great for a comic book, or maybe a television series. Well, guess what? This film is based on a comic book! Huge fans of the comic are advised to avoid this monumental disappointment by all means – unless they’re feeling extra-masochistic and the DMV is closed for the night. But for everyone that has not read the comic book, this is really just another summer blockbuster. This movie is still kind of fun, but not for a glut of merit – unless you really are looking for a dumb action flick. If you do just want to watch a dumb action flick with some funny bits, this may be it. It’s not one of those so-bad-it’s-good films, it’s just barely mediocre. It would have gone straight to DVD – if the cast were different. Even if you do manage to really like this movie, you will likely forget all about it in a week. You may get some enjoyment out of it if you have friends with you to make fun of it but other than that it’s just another summer throwaway that everyone will forget entirely unless there’s an unneeded sequel. A very generous 5/10 – mostly for the Deados, the concept, and for the handful of good laughs this movie managed.