[Spoilers Ahead!, but not all details are shown]

The episode shows Usagi having a dream awakened by Luna. Usagi misses Mamoru. Luna consults Usagi that she can talk to her about anything as Usagi gets dressed. As Usagi walks, she thinks on how the power of the Legendary Silver Crystal is up to her. Luna heads to the command center. Usagi then accidently bumps into someone that looks like Mamoru. Usagi notices Mamoru’s watch starts moving again. Usagi thinks that the guy looks like him, but doesn’t believe it could be him (remember when he got in front of her to protect her, he technically died). It is obvious from the last episode is the guy is Mamoru, but resurrected as a minion of the Dark Kingdom. We see him in front of the arcade and meet Motoki (the guy that works in the arcade) with his friend Endo. 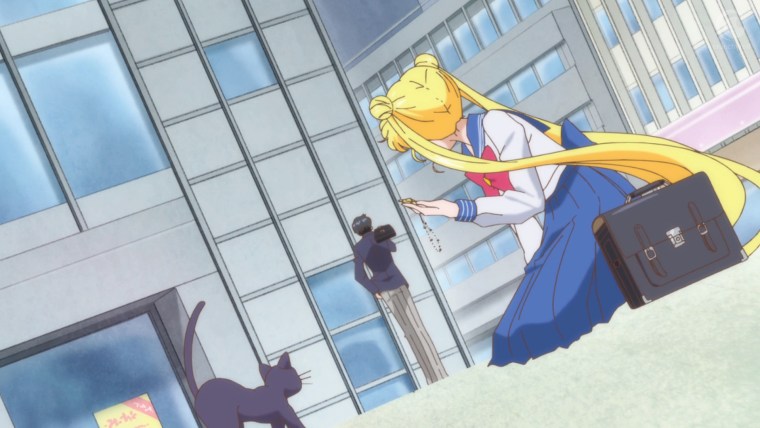 As Endo was about to go the arcade, Evil Mamoru’s eyes do a hypnosis thing to make him walk away. Motoki tries to go after him, but evil Mamoru grabs Motoki’s arm. Evil Mamoru hypnotizes Motoki into thinking Mamoru is Motoki’s best friend Endo. Another friend of Motoki, Reika, enters the Arcade to give him a book. She gives him the book and notices evil Mamoru (Fake Endo I want to call him). Reika drops a book about stones and Mamoru recognizes the stones on the cover were Jadeite, Nephrite, Kunzite, Zoisite. 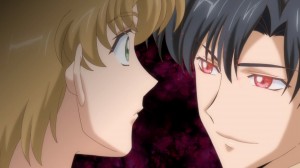 Usagi, Rei, Makoto, and Minako, carrying the sword, head to Ami’s place. Of course, Ami’s place is fancy. Ami uses a diamond ring for Minako to test the sword’s strength. Minako lightly hits the diamond with the sword and it smashes into pieces. Usagi falls asleep. She wakes up thinking of Mamoru and sneaks out to the arcade where she sees Motoki and sees evil Mamoru as Endo. She is shocked. Evil Mamoru talks like he does not know Usagi and seems suspicious. Luna reports to the others who agree; they all think Usagi should stay away from him.

Luna watches a desperate Usagi return to the arcade. She plays the Sailor V video game and Endo (evil Mamoru) is next to her. He asks her questions about Sailor V and if there is a command center, pretty suspicious. It seemed he tried to hypnotized her, which didn’t work.

Usagi is distraught, having almost exposed everything. Ami and Makoto wonder if Usagi will be alright, then they see Reika looking in the Arcade window. She confirms that the “real” Endo-kun had not been around much and the Endo (Evil Mamoru) claim that they’re in the same club as her and Motoki, but has not been seen there.

After the arcade closes, Motoki and Endo (evil Mamoru) play the Sailor V game wanting to get inside the command center. Makoto confronts them but is hypnotized by Mamoru. The others run to the command center and see Makoto there. Makoto attempts to steal the crystal but is thwarted by Rei. Evil Mamoru/Endo who hypnotized Motoki shows himself. The Guardians transform and try to defend Usagi but Mamoru gets hold of the Legendary Silver Crystal. Usagi, hesitant to fight Mamoru, doesn’t spring into action as Luna prompts her. Instead, Luna boldy tries to fight him and Mamoru throws her.

Finally, Usagi to transforms into Sailor Moon. She embraces Luna and says she loves her. It makes the Legendary Silver Crystal light up. She uses the Moon Stick to do Moon Healing Escalation to try to heal them. It doesn’t work on evil Mamoru/Tuxedo Mask and Queen Beryl appears behind him. Queen Beryl takes hold of the Crystal and introduces herself. She asks if she is remembered and then says she will eliminate the Guardians. Her final words, “Princess Serenity, I guess you will be happy to die by Prince Endymion’s hand.” Usagi can’t believe he is Mamoru and the episode ends there. [Spoilers end there as I will not tell about the preview of the next episode.]

It was a bittersweet episode. It was great to see Usagi being in love with Mamoru look more convincing than in the 90s anime. The tragedy of Usagi’s dilemma of not wanting to fight him seemed so emotionally powerful, which is how it’s supposed to be. This reboot continues to impress me. Of course, we know past this point we’ll be getting to the close to the huge battle, that’s all I say. From what I saw that part in the manga, the next episode should be very huge.

All images are for promotional reasons only