The episode starts from the command center. Of course, Mamoru/Endymion is only under Beryl’s control because he was dead and was resurrected by Queen Metalia’s power. It’s cool to see Sailor Mercury create a barrier, as the command center was being destroyed; it’s very useful. Suddenly, the Sailor Guardians disappear with Queen Beryl and evil Mamoru. Queen Beryl grabs the Sailor Guardians using her hair. Queen Beryl tries to make Sailor Moon reveal the secret of the Legendary Silver Crystal. I do admit the hair looks silly but at least in Crystal, Queen Beryl does look creepy and bit more convincing as a villain compared to the 90s anime. Sailor Venus revealed Queen Metalia and Beryl provoked the people on earth and invaded the moon, basically causing the tragedy during the Silver Millennium. It’s not surprising that Beryl wants the Legendary Silver Crystal for herself. This is when things get real. Sailor Venus draws the sword and frees the Sailor Guardians. As a fan, it’s cool to see well-known attacks like Venus Love Me Chain and to see Sailor Moon trying to stab Queen Beryl necklace with the sword. (Her necklace is where Queen Beryl got Metalia’s power.)

I really love seeing Sailor Moon’s determination and strong personality that were not shown in the 90’s anime version of this arc. We see Usagi determined to see Mamoru as himself again. The power of the Legendary Silver Crystal lights up and causes the sword to successfully destroy Queen Beryl’s necklace. As she is withering away, we finally see Beryl’s backstory: she was a sorceress on Silver Millennium Earth, who was in love with Prince Endymion. He did not like her that way. I like seeing Beryl as a bit of a tragic character while the 90s anime just made her a purely evil person.

Queen Beryl is defeated; Queen Metalia controls evil Mamoru. Sailor Moon goes after him, while he has the sword, through a portal. Sailor Moon tries to talk evil Mamoru/Endymion out of it. He tries to get her to say why the Legendary silver crystal is not showing power. The Sailor Guardians manage to find the entrance of the Dark Kingdom. Unfortunately, they come across the Shitennou.

While the Sailor Guardians are dealing with them, Sailor Moon sees Queen Metalia in her massive form. Luna communicates with her revealing that (evil) Mamoru is so strong because a piece of the Legendary Silver Crystal is in his body. To seal Queen Metalia they need the whole Legendary Silver Crystal. In a moment of romance, Sailor Moon shows (evil) Mamoru the watch while at sword point. It appears he might remember the promise attached to it. Sailor Moon uses Moon Healing Escalation. 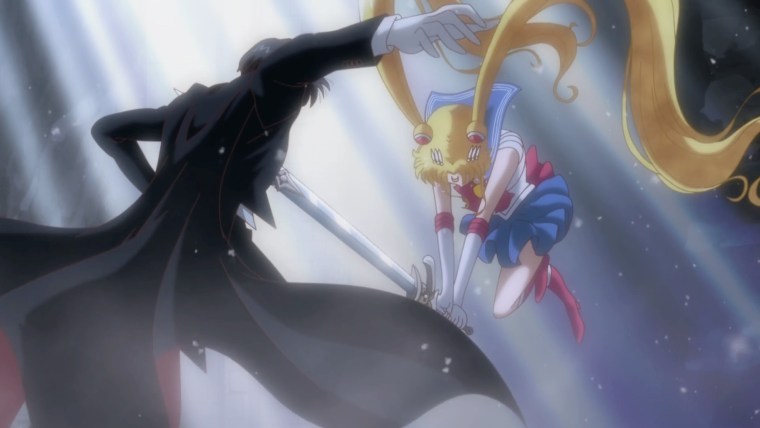 The moon stick power did not work on Evil Mamoru. Evil Mamoru is pretty creepy in Crystal. This is when the episode gets dark and tragic. Sailor Moon grabs the sword and uses it on him and she then stabs herself with it. Very sad, but this is not the end. Spoilers End.

We are close to the end of the story. The episode gives the action people wanted and still keep the romance element of the series. It’s cool to see Queen Beryl past in a tragic like light; as a villain she seemed more convincing. I did notice a huge difference between the Crystal anime and the manga is Sailor Moon killed Queen Beryl in Crystal, while Sailor Venus was the one who killed Queen Beryl in the manga. I do feel mixed emotions on why they did that change along with other changes. Compared to the 90s anime, Crystal keeps the dark elements that the manga shows. The romance element was also strongly intact. Can’t wait for the finale of this arc and then we’ll see the Black Moon for which a trailer has been released.