Once Upon A Time: Snow Drifts Review Season 3 Finale

Everyone’s a buzz about the newest episode of Once Upon A Time.

Summary: In our latest season, we have encountered Zelena, the Wicked witch, who gave us insight into Regina, our not so evil, Evil Queen. Through Kora’s ghost we are introduced to how Zelena’s life began and how Snow White’s path crossed with Regina’s. Furthermore, we are given surprises along the way such as Neil’s death and the revival of The Dark One.

Prior to the last episode, we see how Regina, with her newly found light magic, defeats Zelena and locks her into a jail cell. Now that Regina has been given a second chance and turned into a hero, she is determined to give Zelena a second chance as well. The Dark One is returned his dagger by Belle. We see him supposedly give it back to her to prove his love. Instead, he keeps the true dagger, murders Zelena, and doctors the tapes to make it seem like Zelena has committed suicide. Zelena’s power is released and a portal to the past opens.

In the newest episode: Snow and Charming are celebrating their new son which leads to Emma feeling the need to run off again. They begin retelling the story of how they met to the newest Prince. Meanwhile, Emma’s plans to leave Storybrooke are exposed by Hook. Feeling cornered, Emma storms out of the celebration at Granny’s Dinner. She is approached by Hook, who attempts to convince her to stay in Storybrooke using Henry’s book. They see the light of the portal and Emma, being who she is, is determined to find out what’s up. Upon finding the source of the eerie light, the two are hurtled into the past.

After arriving in the past, Emma and Hook startle Snow who then misses her opportunity to run into Charming. Because of their mishap they decide on asking Rumple for help. They explain their position to him and he agrees to assist them with their return. However, because Emma caused the problem with her parents he insists she must fix that on her own.

With a look into Rumple’s crystal ball, Hook and Emma devise a plan to get Snow White to chase after and steal Charming’s wedding ring. Their new adventure starts as they trail behind Snow as she becomes the thief Regina accused her of being. When Emma is taken by the queen, Hook enlists Charming and Snow to save her. Finally Snow and Charming appear to be back to falling in love. They flirt, she tries on his ring and saves him at the Troll Bridge. Everything falls back into place. That is, until Emma saves a nameless prisoner of the Evil Queen.

Once back at Rumple’s place they are told Emma, being the one who can wield magic, is the only one who can take them home. Being unable to process her own feelings, Emma, Hook and the new girl (currently nameless) are stored in Rumple’s vault. Vulnerable, Emma strikes out when Hook attempts to rouse her spirits. She tells him about how she’s “just missed” home and how it killed her that her mother and father did not recognize her when she’d saved them.

At last they return home, with a new story to tell. At first, all is well, everyone paired up with whom they belong: Hood and Regina, Swan and Hook, Snow and Charming, etc. Unfortunately, because of Emma’s decision, Regina’s love life is short lived. The woman Emma saved was in fact Maid Marianne, the wife of Hood and mother of his child. Regina tells Emma she’s just like her mother, they don’t think of the consequences.

As the episode ends we see the newest twist from Once Upon A Time. An urn from the past, now caught in the present unleashes a blue goo from which a beautiful, blonde haired, ice wielding thing comes. SURPRISE! It appears to be Elsa from Frozen!

Personally, the way this particular episode of Once Upon A Time began was difficult for me to get into. I enjoy the anxiety Swan displays as she plots to run off with Henry again.

Watching Emma and Hook struggle in The Enchanted Forest was definitely more fun! I loved the concept of delving in and literally changing the book of Fairy tales. I felt like it connected the audience to the writers of Once Upon A Time and gave them a moment in the spot light as well.

One of the scenes that struck me as odd was Emma and Hook at the ball. There was a foreshadowing of this moment when Charming had nightmares about not being enough of a father to take care of his new child in a previous episode. I guess it struck me as odd that in his nightmare Emma wore blue and there was a deep red gown she wore in this episode which I’m sorry to say didn’t particularly flatter her figure. In fact, while it looks appropriate from a silhouette pov, facing forward she appeared almost hunched and bloated. 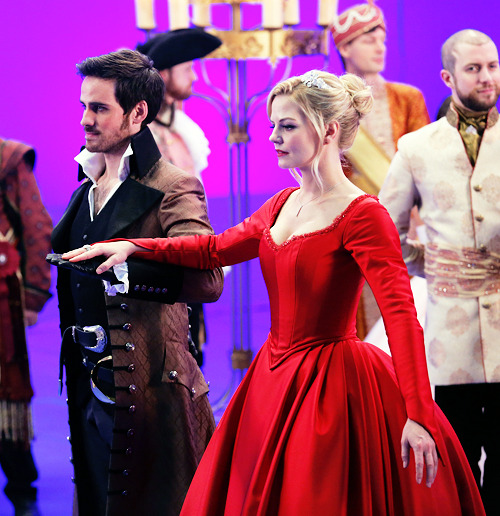 So Swan, now Princess Leia, and Hook, now Prince Charles have to team up with Snow and Charming to get them back together. Thank goodness they succeed, the daughter of King Midas was wretched, hair, wardrobe and personality!

Rumple got a chance to expand himself as well. Again we are shown how much he cares for Bae. It was a beautiful ending when Snow and Charming announced that the new Prince’s name would be Neil.

More to the point then: Kitsis and Horowitz have confirmed Elsa was the blue maiden at the end of the episode. It appears in season four we may be in Arrendale 🙂