Noragami, which literally means Stray God, is an anime released in 2014  and featured on Netflix. Although short, Noragami is a wonderful anime for teens and young adults.

Description from Netflix:  Though he’s a deity, nobody really worships Yato. But after he teams up with a young girl, the pair sets out to bring him the recognition he craves

Noragami is currently 12 episodes long, although there is an OVA episode available here

This series was a ton of fun to watch. It begins with a secondary school student named Hiyori going through an average day and walking home with friends. As they discuss everyday things, such as Hiyori’s mother’s disapproval of her love of wrestling, they pass a flier for a missing cat. Across the street, Yato Kami has seen the same thing. (Yato is a God of War commonly referred to as Yato Kami or Yato chan by his girlfriend). As Yato passes by we see Hiyori immediately notice him and the story begins to unfold. 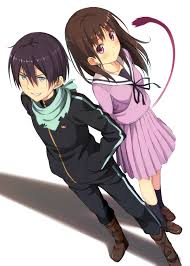 The entire series from this point is about how Hiyori almost dies trying to save an immortal God by pushing him and the cat out of the  path of a bus. From this point on we are dazzled by Yato and his values. He is stubborn, cute, and a total moocher at certain points; you come to love him and his crazy antics.

Along the way you meet other fun characters such as another God of War, a God of Calamity, a God of Knowledge and a Goddess of Poverty. Each God needs at least one Regalia, a spirit who died but has not been tainted by the Phantoms. These spirits are named and cared for by their God. Regalias serve as companions as well as weapons for their God. They are there to help defend a God. Yato takes in a Regalia he names Yuki, Yukine, and Sekki. Yuki is his name, Yukine is the name of his human form and Sekki is the name he takes when he is a sword.

Yato, a God of War, was originally a God of Calamity. Gods of Calamity take on all negative prayers/wishes including but not limited to slaying people. This was in the olden days when it was kill or be killed and Yato partook in this because a God can die if people cease to worship it.

The series secretly revolves around two major themes: Yukine’s struggle as a teenager between good and evil as well as an evil plot by a Nora to get Yato to become a God of Calamity again.

Overall, this anime is one worth watching. Although I would particularly recommend it to youth, wayward/rebellious youth, and young adults, I think this is a splendid anime for any age group. The characters are synced well and the art is beautiful. Color schemes and characters are easy to understand/process and the plot lines are fun. Each episode is relatively short and it is easy to finish in six hours.

(all pictures for promotional purposes only)