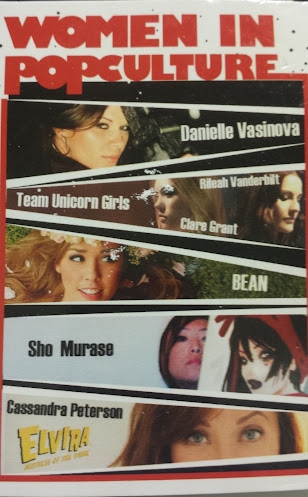 Claire: an iconic female character must show strength and vulnerability. Female characters must be as powerful as males without compromising or highlighting that it’s a woman. (There should not need to be the distinction between men and women types.)

Danielle: I agree with them. Girls can do everything guys can do and look better doing it.
Elvira recalls a story from her generation: Back then, you had to be either a big boobed bimbo or a woman with strength like Clinton or Thatcher. You couldn’t have them both. 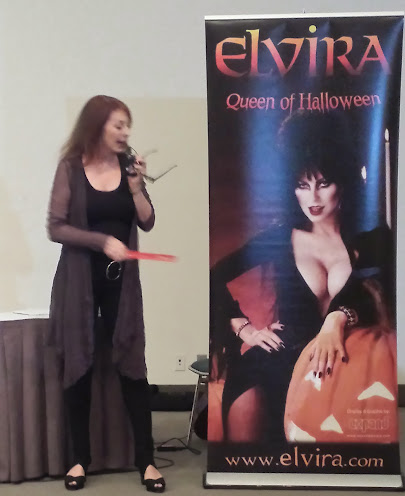 Danielle: She enjoys getting to play Belle because I get to engage in sword fights and ride a horse as well as hours of handling a 1873 Colt pistol.

What is your favorite female character across all mediums?
Danielle: I grew up watching Sheerah, Wonderwoman and Gem & the Holograms. She was also inspired by Elvira and the brand and name she made for herself.

Elvira: She always wanted to be SuperMan. To her, it was fine for a young girl to be SuperMan and not have to make the change to the [lesser} SuperGirl. She made sure, in her first two movies, that she would save herself. Unlike the Disney movies she didn’t want some guy to save her ass.

Bean: Wonderwoman: she’s a bad ass and has a rocking bod.

Rileah: She was ecstatic when she got a chance to do a short (for Team Unicorn) as Wonderwoman. When she was in the costume she actually cried. In fact, she cried because her mother had FaceBook’d her that when she was three or four she’d said she was going to be Wonderwoman and now she’d accomplished it.

Claire: I wanted to be like Sailor Moon (the crowd howls loudly). She had an awesome character arc because she stars out like a cry baby but she learns with every battle.
What do you think the future of women in pop culture looks like? What are your hopes for it?

Bean: Well, most women in the industry are going for a shock factor right now—

Rileah: There’s now a surge of women who are interested in making pop culture.

Claire: The 80’s culture actually encouraged women to take charge and people have a respect for us and know we all come from the same place whereas 20 years ago it wasn’t as accepting for people, let alone women, to be into this culture.

Danielle: The future is in tech; it’s in your pocket. We are all the masters of our own destiny and we create what we want to do, see and become.

What do you think about anime in education?
Claire: I think entertainment to educate people really well, like with John Stuart, tricks ppl into learning what’s going on in the world.

Elvira: old school pop culture is comic books and taught you morals. Learned from SM that you can go out there and save people. John Stuart, great example to learn about govt and politics.

Rileah: Like with Reading Rainbow! They luckily reached their goal in like the first 12 hours. We have the virtual platforms and we will be able to reach so many more classrooms and people now.

Although they began late, the Twistory Panel was worth the wait. It began with a movie highlighting women from our generations of pop. Examples included: the famed comic book heroine Wonderwoman and even Hermione Granger from the HP series.) Once inside it was apparent that Cassandra (Elvira) was our main hostess. Introduced last and greeted by the loudest howls and cat calls she lived up to her fame.

The panel proceeded quickly, Cassandra asked the questions and allowed for her group to answer them. In a way, it was like passing the tradition of pop culture to them; luckily it’s in good hands. The peppy panel discussed topics ranging from their favorite adventures to the future of pop cultures. There were a couple plugs for Team Unicorn and The Reading Rainbow but overall it didn’t take attention from their opinions.