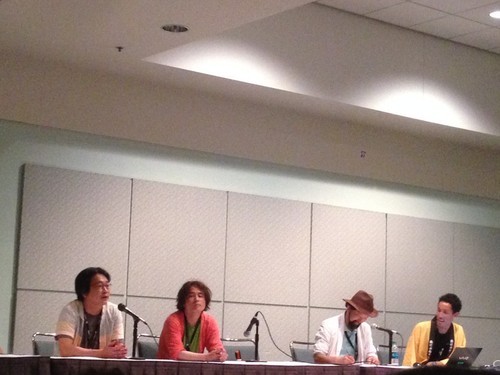 Disclaimer: none of these are quotes

Ochikoshi (translation): Ochikoshi is from A-1 pictures. He is responsible for all titles and he wants to show you all that they do.

Further Translation: It’s been a while since I’ve started coming to AX; I started attending when it was back in anaheim. I just got into the states yesterday and I’m very much looking forward to AX. The Korean BBQ that I had last night is still in my stomach so I’m suffering from that (peels of laughter from the audience) but I’m sure everyone is here looking forward to the raffling afterwards. So be patient we’ll get to that and please enjoy the panel.

Shimizu: At A-1 studios we have two studios and I’m in charge of Koenji studios. I’m in charge of management there. This is my first AX and I’m very surprised at the large turn out. I had Korean BBQ last night, it was great for me and I’m doing pretty well today. So my mic might be slightly limp today but other than that I’m raring to go…

A-1 picture panel (speakers cont’d)
Ochikoshi: So my impression is that a lot of you love to see cute girls in anime (Men cheer loudly).
Do we hear any cheers from ladies in the audience? (few women howl)

Ochikoshi: How do you watch our shows? Legally right?
(crunchyroll/youtube/blueray)

Shimizu: I was intrigued by parts of the clips you cheered at but I’m really impressed that we get a good reaction when a cute girl gets screen time and I think we could’ve gone an hour and still had such a response.

Host: For this video clip we showed mostly last years’ shows and the ones from the past 9 years out of the 50 shows we’ve done. We’d also like to give you previews of the shows we’ve recently done. Before that though, we want to show you some of the titles Mr. Shimizu has done personally

Host: What was it like working on some of these titles?

Shimizu: I’m surprised that Idol M@ster is popular here and I’m impressed there’s a gentleman in the audience who has a glow stick and it is my favorite [color]. 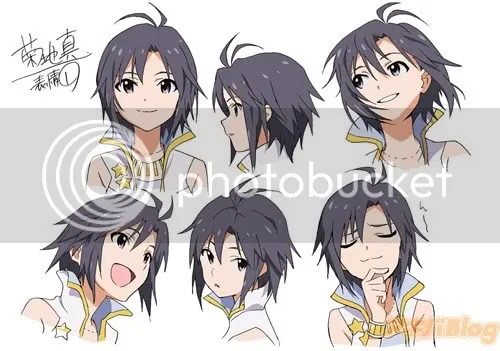 Host: So Actually…do you wanna see previews of some stuff from A-1 videos?

Shimizu: A lot of you might be similar with Sword Art Online and Sword Art Online II will be a continuation of it. The Original Sword Art Online was popular in Japan and overseas. So, the highlight of the new series is certainly on the gunfights. I’m pretty confident that we will be able to deliver a high production value show

Aldonoah 0 s A-1 pictures’ very first combat robot show and this is a complete original story so no one is familiar with the premise. It is the story of a civil war between Earth and Mars
and the producer of the chart said no spoilers so it’s hard to talk about it but [he] promise[s] hard core action and human drama.

Sound track and opening theme is always remembered, what are the classics you go through?
Since A-1 has close ties with Aniplex’s talent pool and can collaborate with artists, we can have music specially tailored to the show.

How many episodes for Aldonoah 0?
It’s a secret. The show will be made so that you will want to follow the show.

Who are your favorite idol M@aster characters? Is there a bias when you write?
When I started with the show Ritsuka was my favorite. Now all of them are like my dear granddaughters.

I like Oreshura I think it’s really popular is there any chance you’ll work on another one or consider it please?
That’s a wonderful request, I want to be your friend. So we currently don’t have a plan for more but we want to hear from as much and many as possible as you so you can petition us.

I want to buy the blueray but we don’t have it.
That’s an industry question. ~Good Luck!~

All images for promotional purposes only.